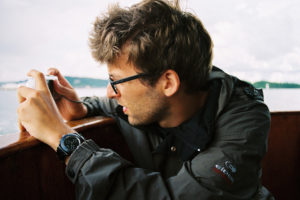 After filming his brothers and cousins ​​in many stories for ten years, Joseph Minster left the Alps in 2005 to study literature and cinema in Paris. Now graduated with a master’s degree in literature and with La Fémis’ directing department, he writes for films and for the web, and often returns shoot movies in his childhood’s landscapes. He has directed more than a dozen short films. In 2015, he won the Sopadin Junior Special Jury Prize for the feature film Entre les bêtes (co-writer with C. Chevalier and C. Schneider). He is the winner of the TV Scriptwriter Prize of the Lagardère Foundation in 2016 for the Charon series project, a shortcom featuring the ferryman of the underworld. Joseph Minster also teaches at the university. Since 2019, he has been a PhD student attached to the SACRe laboratory (PSL University – La Fémis) where he is conducting research on the concept of cinematographic variation.